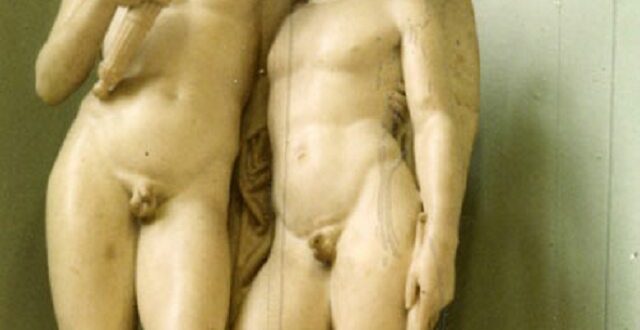 There are some people that we are connected to by inner ties and this is something we will sense deep inside. But be careful, infatuation can create a false positive. In the case of infatuation we feel a deep inner stirring, but it us falling in love with the image of a split-off part of our own soul. Sometimes we will be infatuated with someone who is also a soulmate. The infatuation projection is what will most likely keep us apart. This image also represents the deeply entwined relationship between eros and your psyche or soul. Eros is something much more than sex. It refers to our capacity for oceanic merger with others. Pornography is unerotic sex on the level of the genitalia, while a sufficiently deep platonic relationship could be highly erotic. The path we follow with our eros usually parallels our soul. Someone could succeed in athletics, in business, in some career track or area of tunnel intelligence while neglecting or abusing his eros, but this will be a very hollow success. What advantage is there in gaining a lot of conquests, or neglecting your eros while busily pursuing something else if you lose your own soul in the process? Be true to your unique, individual eros, not one of the conditioned templates that the social matrix wants you to truncate yourself to fit.
For those willing to read more, here’s a highly relevant meditation on soulmates:

Instead of thinking about finding “my soulmate” think instead about recognizing your “tribe of soulmates,” many of whom you probably already know. Consider this card, “Finding your Soulmate Tribe:”

If you are reading this card, then it is overwhelmingly likely that you are incarnating as a social mammal. As a social mammal, so much of the pain and pleasure, so much of the suffering and meaningfulness and fulfillment of your incarnation relates to the other social mammals in your life. No amount of money or sexual conquests will ever begin to compensate you for a lack of soulmate relationships. Relating to random acquaintances and relating to soulmates are two entirely different dimensions. Many people make the mistake of taking their profound inner longing for deep connection and projecting it onto the fantasy of finding that one, all-luminous romantic soulmate. But it would make for a more interesting, varied and developmental incarnation if you had multiple soulmates, and many different kinds of life-affirming relationships. What you are looking for are those to whom you are connected by inner ties. All other attributes may vary with the fantastical variety of human individuality. There is, however, one aspect I especially recommend you evaluate in prospective tribemates — –commitment to consciousness. The other could be at a very different level of consciousness (in that case one of you will likely serve as mentor to the less developed one). But if your goal is development, it will be wise to have some tribemates who share your level of commitment to consciousness. There may, of course, be all sorts of asymmetries in every other aspect such as age, wealth, looks, and even more fundamental asymmetries in religion, sexual orientation, god concept, world view, optimism and pessimism. But if there is some sort of symmetry in commitment to consciousness, there is the possibility of having a spiritual ally, a social mammal or other type of entity with whom there is great potential for developmental symbiosis, for a synergy of minds, hearts and souls. An empowered spiritual ally can provide you with meaningful feedback, he can “mirror” you, but not merely in the narcissistic sense of affirming your ego identity, Rather he can be an interpenetrating mirror that aids in the revelation of hidden aspects of yourself, aspects of both your shadow and your inner light. It would be ideal if you had several such spiritual allies in your life. It’s become a cliché to say that “it takes a village to raise a child.” That might be what it takes to raise a child, but to raise a mutant takes a tribe of fellow mutants who can act as spiritual allies.

see Stop the Hottie! and

Casting Precious into the Cracks of Doom…

and other documents in the Eros: Love and Sexuality category of the writing section