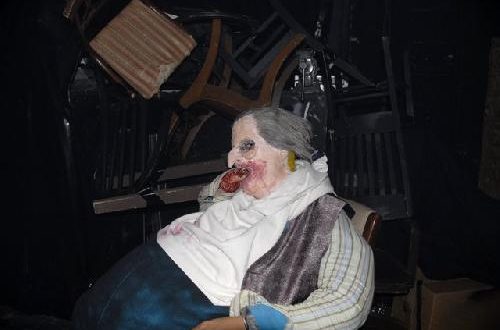 Self-obliteration pictured as urban myth. From

I know two brothers who grew up in almost the same environment, but took very different life trajectories. The family was very loving and supportive of both, neither experienced any shattering trauma, but one of them, ever since puberty, consistently acted out a will toward self-destruction. One very literal form of this was a compulsion to slash himself, and once this was almost fatal. When not acting out such impulses he was charming, often genuinely loving, charismatic, good-looking, funny and fun to be with, etc. By his twenties he had totaled four cars and in each case injured himself and/or others. While on parole he drove drunk with an open container in the car and caused a head on collision, and so forth, and so on — we all know the story, we’ve all seen different versions of it personally and in the celebrity carnival forever put before our eyes.

In some cases you could more successfully try to assign a particular cause like alcohol, especially when there is a genetic proclivity toward the substance. The other brother had that tendency too, could have nearly psychotic episodes on alcohol, but when sober was a very wise, centered person, an excellent father to two young children. This brother seemed to have the greater biological vulnerability to alcohol, but managed to control his addiction and was on a very positive and developmental life path.

So the cause may not be reducible to someone’s genetics, personal history or personality, though all of these may have parallel reflections. The cause may lie in a soul that longs for the underworld journey. To paraphrase James Hillman,”The natural direction of the soul is downward.” In romantic relationships, in relating to the body, in relating to life in general, many seem to have souls that long for the descent. Freud posited two great biological drives — Eros, the life drive and Thanatos (though Freud apparently never used the term), the death drive.

As with all qualities, the combination of Eros and Thanatos differs dramatically with the individual. Some people seem to have the spirit of a blade of grass that thrives in a crack in the cement. Other individuals grow up in loving, supportive families, with all sorts of resources, talents, and gifts, but despite this they will not thrive in the sun and fertile soil; they will let their daylight self wilt and their night self grow and dominate.

Some people seem to need to structure their entire incarnation like a dark night of the soul, and often this includes the awakening as well. There are many seemingly spontaneous remissions in such cases, and cases of hitting bottom leading to an authentic enlightenment experience. But there are other cases where one can only hope that the enlightenment comes in a subsequent incarnation.

From the I Ching point of view*, we meet people halfway. If they approach with worthy intentions, we come to meet them; if they approach with unworthy intentions, if their shadow self is in the ascendant, then we lovingly withdraw energy from them. In I Ching terms we do not “execute them,” which would mean viewing them in our minds as hopeless cases. While on the practical level we are not enablers, and do not meet more than halfway to extend trust and resources that aren’t earned, inwardly we cling to the vision of them at their highest potential.

Since our thoughts are communicated to those with whom we are connected by inner ties, whether said aloud or not, it is crucial how we view them in our minds. We do not presume to lifeguard them, but we are available if they approach with sincerity, and we are especially open to the possibility that sometime they may awaken from self-obliteration. When direct intervention is not appropriate, we can offer prayers for them and others who are similarly afflicted with a will toward self-obliteration.

The self-obliteration drive in some people seems over-determined, with multiple causal vectors pushing in the same downward direction. There may be a longing for descent in their soul, there may be personal history episodes that promoted descent, destructive relationships and all sorts of downward pulling personality attributes. Contemporary Western culture tends to ignore certain paranormal causal vectors such as subtle influence and energetic parasitism, but almost every other culture seems well aware of these factors. A vulnerable soul may attract parasitic people and/or entities/energic organisms that feed off the dark end of the human energy spectrum, and therefore influence a vulnerable psyche toward fear, compulsion, rage, appetite, etc. Too vast a subject to cover here, my introductory essay is Mind Parasites, Energy Parasites and Vampires and you will find many additional writings on this theme in the Mind Parasite Section. This causal factor is another reason to have compassion toward the self-afflicted, we need to have the humility to realize that there is much about their urge toward self-obliteration that we do not comprehend. We must have the same compassion and humble will to know about our own urges toward oblivion.

* I’m indebted to Carol Anthony for her superb elucidation of this I Ching principle. See her book based on I Ching hexagram # 44, Love, an Inner Connection

See A Guide to the Perplexed Interdimensional Traveler for more on meeting halfway, on understanding and transforming afflictive thoughts and emotions and on the need for shocks and how to deal with them.

For more on the human proclivity for addiction and irrationality see:

I.U.I. Incarnating under the Influence in a Polywater World