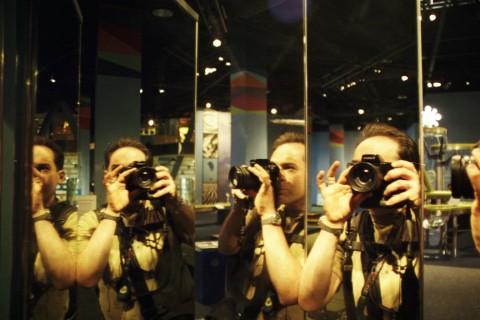 Card #3 – See the Many Sides of your Selves

Know that there are always the blind spots, the parts of yourself you cannot see. Summon the courage to see them. Most human beings are a host of sub-personalities each of which calls themselves “I” when they take over, though they may have quite different agendas and modus operandi. The process of self-unification usually involves the creation of a central witness self that observes the sub-personalities and is aware of their comings and goings and how they vie for control. The voices that speak in your head are of various kinds — some are nagging, fearful, needy, strident, insistent, arrogant or filled with self-hate and so forth. The voice of the Self, however, is calm, clear and compassionate. But we may have trouble hearing that calm and quiet voice from the depths when our inner space is dominated by the clamor of competing subpersonalities.

We tend to think of ourselves as a single coherent personality, and expect the other to be a single coherent personality as well. But a single human being can support many personalities. The dramatic example is Multiple Personality Disorder, which is extremely rare. The familiar example, which is anything but rare, is how different we or the other can think, feel or act based on different moods and outer circumstances. A human being is almost always an aggregate of subpersonalities, and each of these personalities calls themselves “I” when they take over. One of the principle goals of individuation is to build up a central witness personality that is aware of the subpersonalities, that communicates and empathizes with all of them but doesn’t allow any of them to rule unnoticed. A powerful way to build up the witness and reduce fragmentation is to listen attentively to the various voices that speak in your head. Silent meditation is one way to sharpen awareness of the inner voices, but even more effective is mindfulness throughout your day on the revolving cast of inner voices/subpersonalities. Throughout the day there is an almost continual soundtrack, a voiceover monologue (to use a movie analogy), and the voiceover is usually in your native language. If you’re honest with yourself you’ll notice that the voiceover monologue is not controlled by a single personality. Listen to both the content of what the inner voices say and also the tone in which they speak. I might, for example, hear a needy, childish voice in my head say, “I want that!” Another voice that sounds like an anxious and irritated parent says,”You know you’re not supposed to have that.” Another voice sounds like a gruff pirate and says, “Aaargh, what the hell, just grab for it!” Still another voice has a wheedling tone and says,”I really shouldn’t, but just this once, and starting tomorrow I won’t ever again,” and so forth.

Different drives within us can personify into inner characters that become the voices of those drives. One of the essential purposes of an oracle is to act as a mirror of the psyche and confront the inquirer with various aspects of themselves. It takes a great deal of moral courage to be willing to face the multiplicity of selves operating within us.

Depending on the position of this card, it could mean that this is a propitious time to strengthen your central witness personality and/or a need to be more aware of the many sides of others. A good rule of thumb with relationships is to realize that if you don’t know someone’s shadow side, then you don’t know the person. Idealization is a state of dangerous blindness that purposefully overlooks various subpersonalities in the other to form a unified but false picture of them. For example, a romantically infatuated person thinks of the beloved as an angel, or a guru-worshiping person thinks of the guru as a god. Such idealizations are likely to turn into equal and opposite states of bitter disillusionment as they inevitably discover that the idol has feet of clay.

Be wary about listening to (or becoming) inner voices that are not calm and compassionate. The same holds true interpersonally. You may have to listen to voices that are carping, anxious, wheedling, self-pitying, angry and so forth, but listen to them with calm, compassionate understanding. This empathy may gain you influence over the subpersonality (or the outer person) and it will certainly limit how much those uncentered voices can influence you.