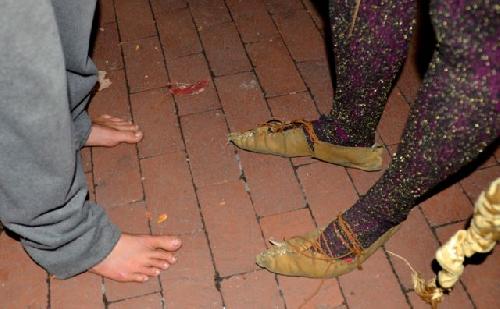 Card #650 – Respecting the Otherness of Others

One of the most mysterious, exciting, frustrating, and sometimes terrifying, aspects of human incarnation is the Otherness of Others. As members of the same species we often have much in common, but as members of the most individualized species we know of, we also have staggering differences. Standing in one elevator might be a three-year old, a ninety-year old, an empathic hospice worker, a psychopathic hedge fund manager, a musical genius, a schizophrenic and so forth. Although they may share a common space, each of them is like a different dimension whose reality parameters vary drastically. One may be feeling a heart-felt moral dimension to life. Another may have numbers related to money running through his head. Another feels a symphony bubbling up from the unconscious. Another is thinking about what they want for lunch. Their cell phones may all show the same date and time and GPS coordinates, and yet they inhabit different universes.

The otherness of the other often becomes most dramatic when we have deep ties such as blood family, friendship or romance. In such cases, we cannot merely look away from the otherness, or, if we do, it is usually an act of negligence that diminishes the relationship. Respecting the otherness of the other means we respect them as another dimension we cannot fully know. We remember the long and unfinished task of knowing ourselves. To be in an elevator with the time displaced version of who we were at age five would also be a meeting of different dimensions.

Part of respecting the otherness of the other is recognizing their unknowable otherness, and the other part is trying to compassionately understand that otherness. This sounds like a contradiction, but it is actually a synergy. By recognizing the strange otherness of the other I peel away the flattened, stereotyped view I would otherwise superimpose on them. What might have been a cardboard caricature is instead revealed to be a shimmering portal. My curiosity is aroused, my desire to know and understand is activated, and my empathy and mirror neurons probe the information spilling out of the event horizon shimmering at the threshold of the other. If you are not fascinated to know what lies behind such thresholds then you are not awake; you are sleeping through the vastly complex social matrix in which you are incarnate. How does the world look to someone of another gender, age, race, religion, sexual orientation, etc.? If you’re not curious about that at least at some times, then you are probably suffering a numbness of some sort that you need to work through.

For some, thoughts are the leading edge of their perception, for others it is emotion, intuition or sensation. But all of us, who are not truncated by some great injury to the human form, have access to all of these. For example, I am an intuitive-thinking type but I have moments everyday when emotion or sensation predominates. Those moments are chances to perceive the universe as if I were a different type. Others are mysterious, but others also broadcast a continual stream of vast amounts of information about who they are. Parts of our brain specialize in facial recognition and we have mirror neurons allowing us to replicate the state of another within ourselves. If the other is like another planet, each of us is like an interplanetary probe bristling with the most advanced sensors, space telescopes, and spectrographic analyzers. If you are able to read these words than you are one of the most exquisitely designed and attuned creatures to understand others ever created. Recognizing, respecting, and sometimes comprehending the otherness of others is one of the greatest and most exciting of life’s challenges, a challenge you can rise to, but never surmount.