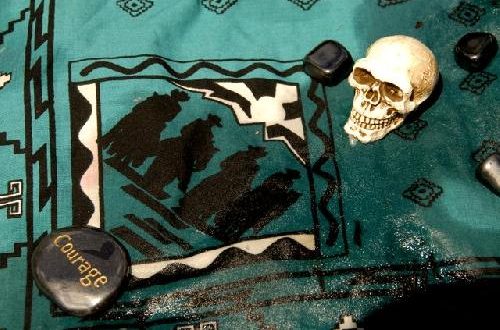 Incarnation is not for sissies, not if you want to do it right. Perhaps, with the classic overconfidence of the disincarnate, you chose this particular incarnation with all its hardships and challenges (see Friends don’t let Friends incarnate in the Babylon Matrix). But now that you are here you need to summon the courage to see it through, and at times that requires warrior resolve and warrior skills. The occurrence of this card means rising to that challenge, moving through rainstorms, deserts, threshold guardians… dark nights of the soul. This card means discovering and rediscovering your quest and accessing what Aleister Crowley calls, “True will.” It means staying true to the life mission that leads to your soul’s fulfillment.

All of this assumes that you need, and are willing to be on, a quest, a focused life mission. Certainly there are other valid life stances — some prefer unstructured being time, some a largely interpersonal or social fate, and many prefer the easy going, take it as it comes approach to life. There are light and dark aspects of all the stances. For example, the quest can easily become a hyped-up form of male adolescent energy that refuses to grow up, or it could be the path of a Warrior with heart.

The most crucial and core form of courage is the will for ruthless and compassionate self-examination. If you don’t have the courage to face your inner demons, then you will fight them in the outer world as phantoms. The mixed case of this is when the phantom gets projected onto an actual outer world demon that must be confronted. This situation requires subtle discernment to perceive the phantom aspects of such confrontation. On the wrong side of this is a tendency toward grandiose and inflated proclamations versus the distinguishing aspect of a Warrior with a capitalized “W” — a commitment to life affirming transpersonal aims. Lower-case warriors are either mercenaries or the brainwashed dupes of a military-industrial complex, fundamentalism, unthinking nationalism or some combo thereof. To be a Warrior with a capital “W,” one needs ruthless self-examination because you must first notice all the many ways in which you have been made a puppet before you are capable of that rare quality called “free will.” To be a Warrior you need free will. As a warrior (lower case) you can be quite fearsome, your titanium alloy exoskeleton can bristle with weapons systems, but as a warrior you live your inner life on the outside only, and this makes you an automaton. A Warrior (upper case), however, can have a thought like Stephen Daedalus, “History is a nightmare from which I am trying to awaken.” A Warrior can be a cognitive rebel working in isolation, or someone called to physical action in the world. The transpersonal cause served by the Warrior must have a moral aspect. Of course a moral relativist will insist that the moral aspect is entirely context specific. But a person in life energy and with access to global intuition is capable of distinguishing a qualitative difference between, for example, the intense physical courage of a Panzer Tank commander, who serves the pseudo transpersonal aim of expanding the fatherland with great determination and efficiency, with the moral courage of someone who is self-honest, who seeks to do service for others and faces down inner and outer forces of resistance and oppression. This moral aspect could be found in the physical/moral courage of someone who is defending against tyranny on whatever scale (from backyard bully to rogue nation-state) and also (whether we agree with the stance or not) in the physical/moral courage of a pacifist making a stand in a dangerous situation.

To be a Warrior means locating your True Will and the transpersonal aims you are willing to serve on your life mission, and then summoning your quest courage to take impeccable action despite resistance, stress and danger.