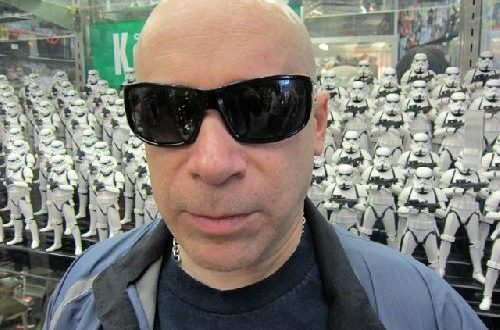 self-portrait at Forbidden Planet in NYC

“Where love rules, there is no will to power; and where power predominates, there love is lacking. The one is the shadow of the other.”

When we fear that we will not get the love we need or want, we tend to strive for power. A classic example is the hunchback future king, Richard III, in the Shakespeare play of the same name. In his opening monologue, Richard tells us:

“But I, that am not shaped for sportive tricks,

Nor made to court an amorous looking-glass;

I, that am rudely stamp’d, and want love’s majesty

To strut before a wanton ambling nymph;

I, that am curtail’d of this fair proportion,

Cheated of feature by dissembling nature,

Deformed, unfinish’d, sent before my time

Into this breathing world, scarce half made up,

And that so lamely and unfashionable

That dogs bark at me as I halt by them;

Why, I, in this weak piping time of peace,

Have no delight to pass away the time,

Unless to spy my shadow in the sun

And descant on mine own deformity:

And therefore, since I cannot prove a lover,

To entertain these fair well-spoken days,

I am determined to prove a villain

And hate the idle pleasures of these days.

Plots have I laid, inductions dangerous,

By drunken prophecies, libels and dreams,

To set my brother Clarence and the king

In deadly hate the one against the other…”

Much in our world is oriented toward the power principle. Some aspects of this power orientation derive from the long patriarchal era of human history. Much power orientation derives from more primordial roots as there are enormous power struggles amongst animals. Social mammals often compete for their place in the social hierarchy. The competition to be the alpha male is often deadly in humans and many other species. When the power principle predominates, life becomes a savage law-of-the-jungle world and everybody loses. The power principle can cause us to believe in the validity of power games, and that success in life can be found by winning power games. Actually, everyone is a loser when it comes to power games. You may gain something in a limited context, but you lose your soul in the process.

I know a young friend who went through a phase where amoral power operators lit up in his mind as numinous figures worthy of admiration and emulation. Some of these were movie characters of the cool alpha male in-command type that predominate in many Hollywood genres. In an email to this friend (we had just seen the superb film Croupier, where the cool-operator type was exemplified) I wrote:

The first step taken toward being a player in the game of coolness makes you a sucker, a fool who completely misunderstands the odds, utterly mistaking what is at stake in life, tricked and seduced into the sucker pitfall of glamorous death energy.

The player thinks he is cool and sophisticated, shrewdly rational in a world populated by suckers and cool operators who profit off the stupidity of the masses. The player thinks he is the sophisticated, dispassionate observer of the hypocrisy, deceptions and folly of others, but conveniently neglects to similarly observe his own hypocrisies, deceptions and follies. The player is actually a fool caught in a mechanical loop, playing out a stereotype that ends with massive losses on many, many levels.

Especially revealing in Croupier is that Jack ends up finding that he has been fooled and exploited by his own father who is also a classic inferior type. One huge significance, is that the player is revealed to be another victim of patriarchal values. He is merely one more patriarchal version of the inferior and unrealized male personality — the supposedly tough and shrewd, operator/observer who is actually a highly narcissistic, self-deceiving, stereotypically nihilistic post-modern neurotic with artistic pretensions. Perhaps there is some unintended significance that the character’s name is Jack Manfried. The last name almost sounds and looks like a contraction of “Man Fraud.”

“For what is a man profited, if he shall gain the whole world, and lose his own soul? or what shall a man give in exchange for his soul?” — Matthew 16:26

What gain is there in winning power games, but losing your whole soul in the process? Consider this a propitious time to shift back to the golden rule and reclaim love and soul from the toxic ascendance of the power complex.

Finding the inner wholeness that causes the power principle to recede:

A study of how the ascendance of the power principle has vast affects on society:

Foxes and Reptiles — Psychopathy and the Financial Meltdown of 2008-9