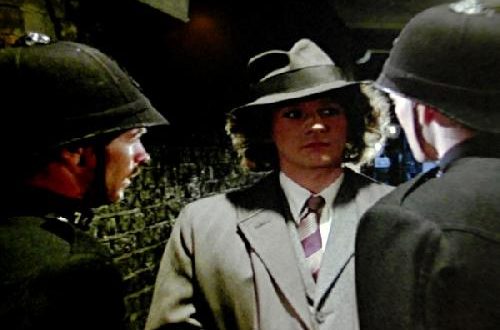 John Hurt as Quentin Crisp in the superb 1975 film (based on Crisp's 1968 book) The Naked Civil Servant The film is a brilliant portrait of a mutant maintaining his unique identity and inner dignity under very difficult circumstances. Quentin Crisp

One of the most crucial defenses from the many hardships of the Babylon Matrix is the maintaining of inner dignity.

Many of us, with the giddy and naive optimism of the disincarnate, chose to incarnate into the human form, never fully realizing the almost infinite array of indignities and inconveniences involved in such a corporeal existence. Being in a physical body subject to illness, disease, gravity, and scarcity of resources is bad enough, but when you add in that you will be stuck in a mono-body reality, in which you will be limited to one gender-specific body aging in a linear time frame, with no ability to change your form at will, so that for decades you may have to live with approximately the same face, race, and other physical parameters programmed into you at birth . . . then the grim imposition of human incarnation becomes nearly intolerable. And if this weren’t enough indignity, in the Babylon Matrix you find yourself in a realm literally swarming with other entities, similarly confined to mono-bodies, who are stumbling and thrashing around in the same murky darkness that envelopes you.

Now, and throughout the history of the Babylon Matrix, unhappy hominids compensate for the indignities of corporeal incarnation by inventing and executing myriad ways, subtle and grossly unsubtle, to insult, degrade and even obliterate the dignity of other embodied entities. Across many periods and cultures this is the most classic of Babylon Matrix games — the oppressed becoming the oppressor. However, if this ever-popular recreation, reinforced by millennia of patriarchal history, does not work for you, if you prefer the deviant path of respecting the dignity of other entities while maintaining your own inner dignity, then this card has relevance to your situation.

The first consideration in maintaining inner dignity is to restrain yourself from all the many ways, subtle and unsubtle, in which you could be insulting or oppressing the dignity of other entities. Many incarnates who have an exaggerated notion of their own dignity have no respect for the dignity of others. They may be acutely aware of perceived slights to their own dignity, while at the same time they are oblivious to the indignities they heap on others. So this is the first rule of inner dignity:

I. First, do no harm to the dignity of others.

Following this rule alone is enough to keep most of us busy with self-examination and restraint for a lifetime. The second, interrelated rule is:

II. Do as little as possible that compromises your inner dignity.

There are infinite ways in which we can compromise our inner indignity. One of the most obvious is when we choose to go along with the unreasonable demands or actions of others. There are other cases where we don’t have a choice about submitting to unreasonable demands and actions. In such cases our outer dignity is oppressed, but our inner dignity does not have to be if we have sufficient inner strength. In some of the worst cases, however, outer indignities may be so severe — the case of torture, for example — that inner strength cannot be expected to prevail. In such cases it is not we who chose to compromise our inner dignity, our inner dignity is compromised by forces outside of our control. Our job, therefore, is to defend our dignity, and that of others, whenever we do have a choice.

The third rule for preserving inner dignity is:

III. Recognize that some people will dislike you and want to attack your dignity through no fault of your own.

The Babylon Matrix is a projection world, where people continually project disowned parts of themselves onto others. The people who want to insult your dignity are not really seeing you; they are seeing a phantom that they associate with you. For example, let’s say a highly attractive young woman is walking down a city street and encountering strangers. None of these strangers knows who she is, but they are all able to register her appearance. To one guy she is an attractively sculpted piece of meat lighting up in his reptilian consciousness like a glowing target. He sees body parts and shoots an unpleasant glance at her, expressive of what he would like to do with those various body parts. A young woman passes her and sends her another unpleasant glance that is expressive of her projection: “That bitch thinks she can get any guy she wants.” Each of these glances is an attack on her dignity happening on the energetic plane, and although she can resist them and preserve her inner dignity, it is also rather exhausting and stressful. And then there is the very real danger that some projection-based attacks may come on the physical plane.

Of course, you don’t have to be good looking to be subject to noxious projections. If you are a mutant, for example, and hard for people to categorize in their minds, you may get some very polarized reactions. Also, the projections and attacks on our dignity do not come exclusively from strangers or people who completely misunderstand us; they can also come from people who are very close to us and know us well. As two people get to know each other they become more real to each other, but oddly enough when they are really close with each other, they can start to become less real again. When two people are all too familiar with each other they become part of each other’s mental furniture. Since most people are a bit mixed up and ambivalent about self-image, identity and other life aspects, when two people are really close they become mixed up with each other’s inner ambivalence. If one person has compromised inner dignity, he will inevitably strike out at the inner dignity of someone he is really close to.

The principles of maintaining inner dignity could be multiplied past the scope of this card, because they apply to so many spheres and aspects of life.

Consider this a propitious time to reflect on the many ways that you can benefit yourself and others by maintaining inner dignity.