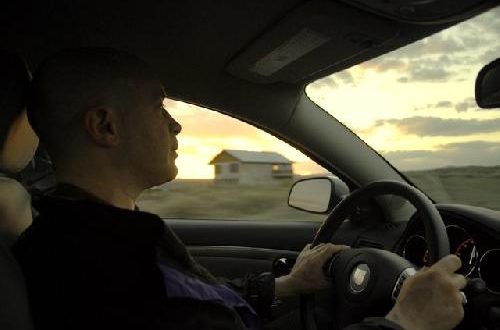 Card #416 – Journeying into the Future

A car is a time machine carrying you into the future. Behind you is the past, a traversed trajectory, and up ahead is the future, but the vehicle itself is always in the present. Usually you have a degree of choice about what future you approach. The steering wheel, brakes and accelerator allow you to shape your somewhat unformed trajectory into the future, but there are formed aspects that limit your choices as well. The car can go forward or back, but cannot so easily travel beneath the road or into the sky. The car has inertia and temporal momentum and you cannot change its trajectory instantly, you can operate it only in ways allowed by the laws of physics and must also stay within human laws of traffic or eventually you will be pulled over, and may even have your right to drive revoked. You have only so much gas or battery power, and occasionally the car may break down and further limit your choices. Being in a vehicle or a physical body provides possibilities, choices and opportunities, but also limitations and conditions that can’t be fully predicted.