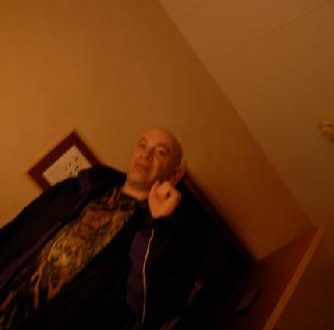 How do others see you? One answer is that they often see you through a glass darkly. Sometimes what they see in the dark glass is a distorted reflection of themselves which is projected onto you. Some people will project their shadow onto you, the parts of themselves they don’t accept and may consider inferior or unwanted. Other people may project onto you their soul, or the unintegrated masculine or feminine side of their being, or other aspects of themselves which will cause you to light up in their psyches with an idealized glow. Still others may see you empathically and see aspects of you more clearly than you are presently able to perceive.

The person who took this photo of me, for example, at times saw me accurately, sometimes idealized me, and other times saw me through projected shadow. My vision of him also included these three types of view which were sometimes superimposed upon each other to create a partly clear and partly distorted view. Almost any deep relationship with another is going to involve all three types of view.

Since the way others view us is often unbalanced and distorted, we must be very careful not to allow our sense of ourselves to be controlled by the temporary view of any particular person. When I was an adolescent I tended to think that if someone disliked me that it must be because of a defect in me. Later I came to realize that sometimes others didn’t like me because of a talent or valuable attribute in me which aroused their jealousy. I also discovered as an adolescent that how I felt in the presence of others was often an indication of how they viewed me. I had this realization when I noticed that whenever I attempted to speak with a particular college professor of mine, I always felt stupidly inarticulate. I knew that I wasn’t stupid or inarticulate, and rarely felt that around others. I also noticed that this professor seemed to view all students with condescension and contempt, and came to realize that my feelings in his presence were reflecting his undiscerning projection onto all students.

On the other hand, in many cases, feedback from another person may give us crucial insights into ourselves, into how others perceive us and how we are affecting others. When getting feedback from others, I like to triangulate. When three or more independent witnesses make similar observations, I know to take them very seriously. For example, having heard from three or more people that I sometimes appear arrogant, I know that arrogance is something I have to work on. If one person, however, tells me something about myself that I haven’t heard from others, I put that observation on the shelf as an anomaly and may wait to see if it is supported by feedback from others. If it isn’t, I need to evaluate whether the anomalous observation is a unique insight of the witness or (the more likely case) an artifact of that particular person’s psychology and likely a projection. I must also recognize that empathic, insightful witnesses may sometimes give erroneous feedback and, conversely, that highly unreliable witnesses may sometimes give accurate feedback.

Unless we are profoundly autistic, disassociated or comatose, we all care about how others see us. A classic statement that almost always indicates a psychologically naïve person is: “I don’t care what other people think.” Usually the statement is said aloud to some audience to have an effect on them, showing that the speaker does indeed care what other people think. We are social mammals filled with mirror neurons, which apparently exist to allow us to be empathically attuned to the state of others. We care very much what others think of us. That caring easily becomes a disempowered dependence when we allow others to control what we think of ourselves. In a more evolved person the caring becomes an empathic and ethical concern for the effects we are having on others.

In an ideal case, the other is a spiritual ally perceptive enough to “mirror” us. Mirroring is feedback, usually in the form of well-formulated words that provide accurate descriptions of how we seem to others and the effects we are having on them. Oracles can be spiritual allies that are especially good at mirroring. Presumably, oracles do not have egos, and therefore do not project onto us. Human spiritual allies can also provide invaluable mirroring, but the quality of the mirroring is expected to have inconsistencies. For example, a spiritual ally of mine who has often provided exceptionally accurate mirroring, recently gave me feedback on something I wrote. The feedback he gave, however, was highly inconsistent with what many others provided about the same document. I reported that back to him and presented some reasons why I thought his feedback might be more an artifact of interpersonal dynamics than of the document in question. As a mature, self-aware person he did not respond defensively, but considered my counter feedback, reread the document and agreed that his original feedback was mistaken. Similarly, when I apply the principles of this card to how I see others, I immediately confront the reality that I am also looking through a glass darkly much of the time. If someone really irks me, gets under my skin, then I have to be especially wary about shadow projection. If the person who irks you resembles you in age and/or gender, then shadow projection is even more likely. If someone lights up in my mind’s eye as highly attractive, I need to be wary of idealization. You know that you are idealizing someone if you are unable to recognize his shadow. If this is the case, don’t jump into a romantic relationship or grant him unearned trust while you are still unable to recognize his shadow. Finally, I have to be very careful about my vision of others whom I know very well and have successfully mirrored in the past. This past clarity does not mean that there aren’t other aspects, or new developments in the person, which I may not see or see in a very distorted way.

How others see us, and how we see others, involves a complex intertwining of empathic insights and distorted projections.