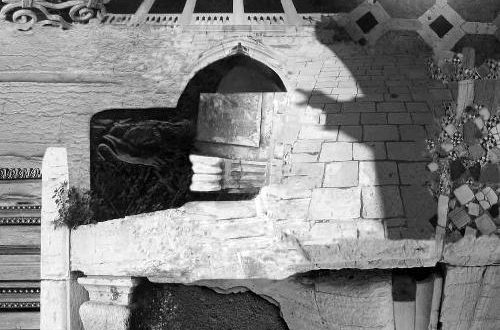 "Hand of Fate" copyright 2007 by my friend Michael Tyson Murphy One of a series of collages made from his original photographs of Venice Card URL: http://www.zaporacle.com/card/hand-of-fate/

“The fates guide him who will; him who won’t, they drag.” — Ancient Greeks

One of the core, irreducible truths of human incarnation is being subject to the hand of fate, to forces outside of our conscious control. There is a recent New Age tendency to psychologize everything, to see every aspect of health, wealth and life in general as reducible to psychological causes. But the citizens of Pompeii didn’t share some psychological complex that required all of them to be enveloped in volcanic ash in 79 CE — some things really are best understood as the hand of fate. Even insurance companies recognize that some things are “acts of God,” and not anyone’s fault or subject to human control. Kamran Hamid said, “Fate is for those too weak to determine their own destiny.” I’m not sure who Kamran Hamid is, but one assumes he didn’t live near an active volcano. From a more mature perspective, Shakespeare wrote, “What fates impose, that men must needs abide; It boots not to resist both wind and tide” Another very traditional view of fate is reflected by Emerson: “Fate is nothing but the deeds committed in a prior state of existence.” But even if this were true in some cases, would it be true in every case? Do volcanoes erupt only when it is consistent with the prior deeds of those who live nearby? And even if fate were reducible to prior deeds of forgotten incarnations or inscrutable unconscious forces, how much does that perspective help you when you are in the hands of fate? If it keeps you from victim mentality and allows you to approach fate from an empowered Warrior stance then I am all for it. Paraphrasing Don Juan (Casteneda), “For the average man everything is a blessing or a curse, but for a Warrior everything is a challenge and a learning experience.”

Depending on how the hand of fate touches you, there may be better and worse options for interpreting and reacting to fateful occurrences. Consider this a propitious time to contemplate how you respond to the hand of fate.

For a more thorough critique of the New Age inflation of “you create your own reality” into an omnipotent fundamentalism see: Dynamic Paradoxicalism — the anti-ism ism

For more on the Warrior and Taoist approach to fate see:

The Way of the Warrior

The hand of fate often takes the form of a shock, which may seem positive or negative. Shock, or punctuated equilibrium, is crucial to both personal development and evolution. If you are presently dealing with the hand of fate in the form of shock, you may benefit from reading “Dealing with Shock” from A Guide to the Perplexed Interdimensional Traveler: