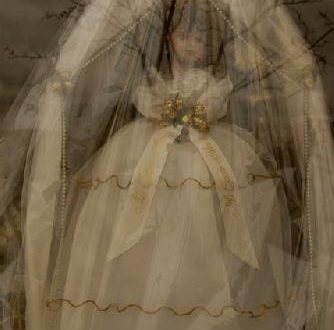 Romantic fantasies often become like a spell or an enchantment that can put us to sleep or freeze up our lives for long seasons of unfulfilled desire. The fantasy becomes like the thick plate-glass window of a storefront. Inside the window is the glittering bauble, the Hottie, Mr.or Miss Right, the romantic fantasy — which may be interpersonal or some other great fantasy we have not fulfilled — and we are like the hungry street urchin, our gaze forever mesmerized by the unobtainable precious inside the store. Some never awaken from the spell or enchantment. In Dickens’ Great Expectations, one of the main characters is Miss Havisham, a wealthy spinster who had been stood up at the altar. Although the betrayal happened decades before we meet her, she remains wedded to her disappointed romantic fantasy and flits about her darkened house in her faded wedding dress, the decaying wedding feast still on the table, and all the clocks stopped at twenty minutes to nine (the time she learned of the betrayal). Film versions of the novel have portrayed her as very elderly, but Dicken’s notes indicate that she is only in her mid-fifties. Her stillborn life away from sunlight has prematurely aged her, and she is described as looking like a wax work or a skeleton with moving eyes.

Consider this a propitious time to awaken from any romantic spells or enchantments that have kept part of your life frozen. The spell or enchantment does not have to be about interpersonal romance, it may be some other fantasy of unfulfilled success that keeps you from appreciating the life you do have.

If the life freezing enchantment is about romantic fantasy I recommend the book Love 101 which the late Peter McWilliams generously posted free online.

Love is a gross exaggeration of the difference between one person and everybody else.

You will become as small as your controlling desire; as great as your dominant aspiration.

The continued propinquity of another human being cramps your style after a time unless that person is somebody you think you love. Then the burden becomes intolerable at once.

Aloneness is inevitable in being human. People cannot accept this. They should be aware of it and use it. It heightens your perceptions. — Edward Albee

Solitude gives birth to the original in us, to beauty unfamiliar and perilous — to poetry.

The love problem is part of mankind’s heavy toll of suffering, and nobody should be ashamed of having to pay his tribute.

and the other documents in the love, sexuality and eros section of this site.
2020-08-06
tjd