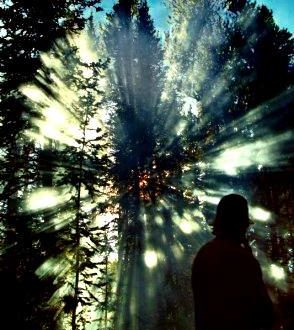 Sunlight streaming through foggy wood smoke in the forest at the National Rainbow Gathering in West Virginia Card URL: http://www.zaporacle.com/card/finding-your-way-through-the-fog/

Card #402 – Finding Your Way Through the Fog

Recently I heard someone who claimed to have contact with the other side. He said that those in the afterlife usually found it difficult to come back to this realm because it was like entering a thick fog of negative emotion and irrationality. Whether this is true or not, I do know that this realm often feels like it is obscured by a thick fog. Some say we are adversely affected by the fog of electromagnetic noise coming from cellphones, wi-fi, florescent bulbs, etc. Recently, there was a brief blackout where I live and I felt a wonderful quieting that was more than a diminishment of acoustical noise. I find the fog of psychic noise more oppressive, and for this reason living in large cities is difficult for me, even though I grew up in the Bronx. I like to get up in the pre-dawn hours to write, a time of day when there is less psychic noise of waking personalities in the surrounding community. There are places and times when the fog is lessened, and we need to make good use of such zones of clarity.

Much of the time, the thick and heavy fog of the Babylon Matrix, whatever its source, feels inescapable. This is one of the givens of human incarnation. To find our way through the fog we need strategies for dealing with it.

Using myself as example, the fog is often created by internal perturbations — fluctuations in my brain chemistry and the ever-changing weather systems of mood. What I eat has much to do with the thickness of the fog. If I eat heavy, highly processed food, dairy, etc. then I am going to feel foggier. If I eat smaller portions and mostly raw foods, I tend to feel sharper. Similarly, vigorous exercise makes me much sharper. Working on externals, I try to avoid living in places where the fog is thicker, and I try to use the times of the day when there is more clarity to do my highest value work. There are two basic strategies implied here — going to places where the fog is not so thick, and maintaining practices to make yourself sharper so that you can be alert even in a foggy realm.

Some of the thickest fogs are created by the presence of unconscious people in our environment. Sometimes the fog they create is explicit and tangible. You may be a captive audience, riding in a vehicle for example, with others who have nothing to say and who are saying it as loudly and volubly as possible. This is a direct interference with your interior processing unless you are especially gifted in being able to tune it out. Fog can be coming from the television on in the background, from the info overload of the present era, with text messages, emails, phone calls, advertisements, and overheard chatter all streaming in at once. The average home has half a million objects in it these days, and many of those objects have computer chips in them and are subject to distracting and maddening glitches. Other times the foggy interference is subtle, more of a vague, pervasive miasma.

I often find that the fog seems to creep up on me, and I’ll notice that I am in state that is lethargic, unfocused, a fungal-like fuzziness overtaking me, slowing me down, sapping the very resources I need to clear through it. To find my way through such a fog, I ask myself, “What is the best use of my time right now?” If something of high value is available, something I will remember well on my deathbed, then I try to prioritize whatever is — usually a creative task, a quality human interaction, or an enriching cultural experience. In other cases, the best way to deal with the fog is to summon will and focus to work through some of the obscuring clutter of unfinished tasks and disorganized objects. Cleaning up my living space is a good use of such time, it doesn’t take much mental clarity and a messy living or working space is a huge fog source. Sometimes meditation, not doing, is the best choice as it can increase awareness of the fog of distracting thoughts and inner preoccupations. Intense cardio exercise will almost always cut through fog for me. Spending time in nature can also be an antidote to some of the manmade fogs, a noise and clutter free zone.

This card was partly inspired by an email I just received from Brandt, a young friend with a strong commitment to consciousness. He wrote, “I am back in Olympia, re-adjusting to this city after some travel, and I feel like the year away has given me the ability to sort of find a bit more of who I am or want to be, so the city with all of its influences on who I could or should be seems less daunting, and I feel much less anxious when I don’t line up with the images/currents around me.” In other words, by taking a year off from college he has a stronger sense of who he is, has progressed on the path of individuation, and therefore the prevailing zeitgeist around him cannot dominate him, cannot fully fog his inner clarity and sense of who he is.

Although Brandt is finding his way through the fog, there are also lost souls, those who immerse themselves into thickening fogs. Some people are so accustomed to living in fog that they are no longer aware of it. Fog has become their default state, and they are comfortably or uncomfortably numb. Many are in medicated/self-medicated fogs, or eclipsed by the fog of sub-clinical depression, which has become almost the norm in our society. In the midst of thick fog we may become apathetic and indulgent, slouching into our various addictions. A particular danger for me is to stop in the midst of fog and blame myself for it, and look back regretfully. Looking back in a fog one becomes paralyzed. When in a fog we need to look at what is immediately before us and directly up ahead. We need to be aware that we are in a fog to be able to sharpen ourselves to deal with it. It is crucial that when we recognize we are in a fog that we do not thicken it by wasting energy on self-criticism.

To find our way through the fog takes much inner clarity, strategy and determined focus.