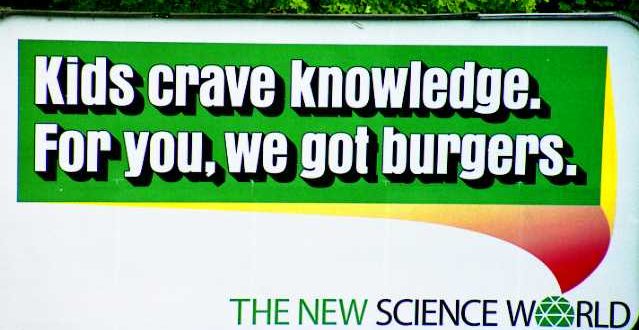 billboard for Science World in Vancouver

The matrix would like you to be so immersed in the mundane and busy work that you will come to see junk food and channel surfing as rewards. You did not incarnate to be a worker drone willing to settle for inferior nourishment.

A couple of summers ago I saw a billboard ad for Starbucks in several locations in Seattle. The ad depicted the silhouette of teenagers swinging on ropes from high tree branches into a shimmering lake. The headline of the ad was just two words, “Remember summer?” And then there was the inevitable photo of what appeared to be an ice cream Sunday with whipped cream and syrup rising above a Starbucks to-go cup.

This ad is a classic message from the Babylon Matrix, and the key to deciphering it is to remember that ads work through punishment and reward; they manufacture suffering and suggest a pleasure you can purchase to relieve it. The ads occurred during the summer, so why did the headline say, “Remember summer?” The intended market for the ad were workaholic yuppies who weren’t having a summer, and would see the ad as they commuted to florescent-lit cubicles,etc. I saw the absurdity of the question because I was really having a summer. Although I was 47 that summer, I was traveling out of a backpack, spent most of the summer sleeping under the stars, and experienced shimmering lakes that were not on billboards. I wasn’t able to do this because I was wealthy, but because I was willing to deal with the hardships of adventure and not willing to accept a nine-to-five life.

The question and image on the ad were there to prick commuting workers with pain, to remind them of what they had lost, to remind them that summer and youthful adventure, if they ever had them, were now in the past tense, at best a nostalgic silhouette of idealized memory. What’s the answer to this suffering and sense of loss? A five-dollar ice-cream-sundae cup of coffee to spike their blood sugar on the way to work.

Don’t allow yourself to be sold short, manipulated for rewards that lead to an early heart attack. See the world again with beginner’s mind, the eyes of a child, and follow the path of knowledge, the path of heart.