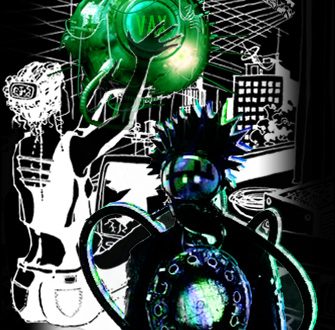 Collage by Drew Stricker (builder and webmaster of zaporacle.com) copyright 2006

Diving into the unconscious and dealing with whatever hair-raising events, visions, entities, life-changing realizations you find there.

Sometimes we are in a state where we are consumed or obsessed with some outer controversy, but actually what we are experiencing is much more fundamentally an agitation happening in the unconscious. We live in a mostly extroverted culture where problems and rewards are located in the outer world. But virtually all human problems — war, conflict, environmental destruction, etc. ultimately derive from a single source — human psychology. Try the following meditation: sit still, focus on your breathing, but instead of trying to still your mind, let it run amuck, going wherever it wants to. Have a pen and notebook (or other recording system) in front of you, and record what comes up. It is also of great value to pay attention to your dreams and record them for further study.

How do you know yourself? One way is continuous, mindful attention to the movies with voice over narration playing in your head all day and all night. There are waking movies, dreaming movies and day-dreaming movies. The Dubyah sort of method of self-inquiry would be to ignore these movies as just bits of nonsense. But notice that every bit of ephemeral whatever — a flickering image, a twisted thought form of words strung together — each of these has an absolutely factual existence. It is a fact that you thought of that particular image, those particular words. The unfolding of the universe is altered because you thought of one thing and not another. And regardless of what a dismissive ego might think, each of these “bits of nonsense” happens for a reason, is a product of inner forces operating within you. Acknowledging this takes courage, because we would rather cling to a neater, tidier version of ourselves — an air-brushed year book photo, when actually we look more like labyrinths filled with moving images and words. And these labyrinths have twists and turns and secret corridors we may not know ourselves. If we don’t know them, then this unexplored content — sexuality, emotions, unintegrated desires, etc. — will come spilling out of us as slips of the tongue, and sometimes as horrendous irreversible actions (the stuff that personal and collective histories are made of). For example:

Besides careful observation of inner content, you must also recognize that you are not merely a passive observer of these inner artifacts. In fact, you are the producer, the director, the special effects team and all the actors in these inner movies. You can decide to start editing out certain repetitious scenes and looping voices. You can consciously choose and create thought forms, images and scenes to add to your inner content. Exploration of inner content is not like a tour of a museum where you mustn’t touch any of the glass cases or their curious contents. Inner exploration is an active, interactive, and sometimes interventionist process. To observe a thing is to change a thing, and the maximal case of this is when the object of your observation is your own inner content. Crowley’s definition of magik is: “The science and art of creating change in conformity to will.” You are at your most magically empowered when you choose to use your will to create change in your inner content. So throw open all those glass cases, probe all the curious inner contents, and, when you are ready, grasp hold of some of these strange artifacts and metamorphose them with your true will.

Exploration of inner content is a pathway of truth which takes great courage, moment by moment. Not everyone who glimpses this pathway to truth has the courage to follow it into the labyrinth of the unconscious. Consider the poem “The Wayfarer” by Stephen Crane (1871-1900):

“People will do anything, no matter how absurd, in order to avoid facing their own souls. They will practice Indian yoga and all its exercises, observe a strict regimen of diet, learn the literature of the whole world—all because they cannot get on with themselves and have not the slightest faith that anything useful could ever come out of their own souls. Thus the soul had gradually been turned into a Navareth from which nothing good can come. Therefore let us fetch it from the four corners of the earth—the more far-fetched and bizarre it is the better!”