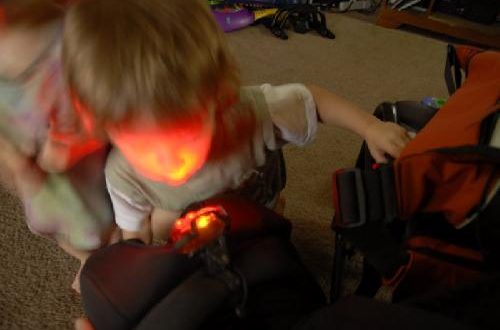 A beginner’s mind is open, curious, even awed by what is, and free of preconceptions, expectations, and prejudices. Beginner’s mind is like the mind of a small child that discovers things anew and is filled with wonder and amazement.

Beginner’s mind led me into the creation of this card and generated a new discovery about beginner’s mind. While looking through some photos on my computer I came upon a rather blurry image of a four-year-old boy named “Indigo” that immediately said to me: Beginner’s Mind. Instantly, I recognized that this should be an oracle card, and the next moment googled “beginner’s mind.” The first article I opened was a lecture on beginner’s mind by Abbess Zenkei Blanche Hartman and I immediately discovered an amazing synchronicity. Her illustration of beginner’s mind was also about a boy named Indigo!:

“Earlier this week I was having lunch with Indigo, our small child at City Center. He saw an object on the table and got very interested in it. He picked it up and started fooling with it: looking at it, putting it in his mouth, and banging on the table with it—just engaging with it without any previous idea of what it was. For Indigo, it was just an interesting thing, and it was a delight to him to see what he could do with this thing. You and I would see it and say, ‘It’s a spoon. It sits there and you use it for soup.’ It doesn’t have all the possibilities that he finds in it. Watching Indigo, you can see the innocence of ‘What is it?’Children begin to lose that innocent quality after a while, and soon they want to be “the one who knows.” We all want to be the one who knows. But if we decide we “know” something, we are not open to other possibilities anymore. And that’s a shame. We lose something very vital in our life when it’s more important to us to be ‘one who knows’ than it is to be awake to what’s happening.”

Consulting an oracle requires beginner’s mind. It is not in your control, or anyone’s, what card or hexagram or rune comes up. Oracles are based on synchronicity, based on the principle that the oracle, this artifact of the outside world, can offer uncanny parallels to what is happening in your inner world.

On the other hand, when you defer to experts, or when you study the world through a prestructured syllabus offered by dry academia, then you tend to see through a glass darkly and the living tissue of the world recedes from your gaze.

One of the key tendencies that keeps us from beginner’s mind is the deference and servility to outside authority that we are conditioned to accept throughout life. It doesn’t always occur to us that we can take a fresh and independent look at a subject even though experts have arrived at established conclusions about it. The power of the beginner’s mind to see through to what’s really happening is illustrated by Hans Christian Andersen’s classic fairy tale “The Emperor’s New Clothes.” Wikipedia summarizes the tale as follows:

“An emperor of a prosperous city who cares more about clothes than military pursuits or entertainment hires two swindlers who promise him the finest suit of clothes from the most beautiful cloth. This cloth, they tell him, is invisible to anyone who was either stupid or unfit for his position. The Emperor cannot see the (non-existent) cloth, but pretends that he can for fear of appearing stupid; his ministers do the same. When the swindlers report that the suit is finished, they dress him in mime. The Emperor then goes on a procession through the capital showing off his new ‘clothes.’ During the course of the procession, a small child cries out, ‘But he has nothing on!’ The crowd realizes the child is telling the truth. The Emperor, however, holds his head high and continues the procession.”

One of the things that blocks us from beginner’s mind is allowing others to stand between us and perceiving the world for ourselves. Other eclipsing forces that keep us from beginner’s mind are habits of perception, prejudices, blind spots and tunnel vision. Cognitive psychology recognizes “schemas,” classic patterns of emotional reactivity that can perpetually color how we perceive reality. These schemas include abandonment fear, low self-esteem, deprivation and entitlement. Many people look at the world through an unexamined template that they lay over everything, such as,”I never get my fair share.” or, “Life sucks and then you die.” Beginner’s mind means you are not imposing such blinding templates on what you perceive.

Another way of killing beginner’s mind is to be in a state of resisting the Tao. A simple way to tell if you are resisting the Tao is offered in A Guide to the Perplexed Interdimensional Traveler:

“But the ego, like a nervous back seat driver clutching an imaginary steering wheel in its sweaty, white-knuckled grip, never trusts that nonlinear path of the creative so completely out of its control. Categories (presented as a list of gerunds) that indicate the ego resisting the Tao and/or trying to assert imaginary control over it include: WANTING, WISHING, WORRYING, HOPING, FEARING, DREADING, DESIRING, ENVYING, COMPARING, SUPERVISING, LIFE-GUARDING, JUDGING, COMPLAINING, SELF-PITYING, STRIVING, ANTICIPATING, EXPECTING, PRESTRUCTURING, CONTRIVING, FORCING PROGRESS, HEDGING, RATIONALIZING, CLINGING AND DOUBTING.”

This same document points out ways to get past other classic repressions of beginner’s mind. Probably the most common blockage is an ego-mind alliance in the ruling position in our psyche rather than our global intuition. Beginner’s mind is an intuitive mind, a mind that enjoys being in a state of creative play rather than a mind that, with grim determination, is looking for the means to a particular end.

The beginner’s mind is alert to the numinous, to that which lights up in our psyche as having an uncanny significance, and is willing to follow that numinous object down the rabbit hole and find how it deep it really goes.

See: The Path of the Numinous — Living and Working with the Creative Muse

The beginner’s mind is comfortable with paradox and doesn’t try to flatten the world into absolutisms and fundamentalisms.

Finally, I’ll close with a paragraph from the synchronistic lecture on Zen where I discovered the second boy named Indigo:

Consider this a propitious time to be bride and bridegroom of amazement and empower yourself with beginner’s mind to take the eternal voyage of discovery.