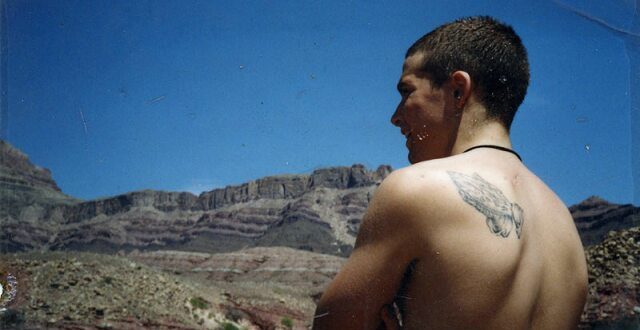 Adam in the Grand Canyon back country CARD URL: http://www.zaporacle.com/card/answering-the-call-to-adventure/

Card #267 – Answering the Call to Adventure

The hero’s journey always begins with answering the call to adventure. The journey will always involve a descent into darkness, but it must be undertaken if we are to fulfill our destiny. As Shakespeare wrote in Julius Caesar, “There is a tide in the affairs of men, which taken at the flood, leads on to fortune; Omitted, all the voyage of their life Is bound in shallows and in miseries.”

Many of the worst regrets are not for what was done, but for what remains undone. And remember that the call to adventure comes in very unexpected forms and makes demands that may be offensive to rationality, practicality and “good sense.” If you’ve read Tolkien’s The Hobbit, you may remember how one part of Bilbo answered the call to adventure, while another part, the sensible, respectable middle-aged property owner part, resisted at almost every step.

“This first stage of the mythological journey – which we have designated the “call to adventure” – signifies that destiny has summoned the hero and transferred his spiritual center of gravity from within the pale of his society to a zone unknown. This fateful region of both treasure and danger may be variously represented: as a distant land, a forest, a kingdom underground, beneath the waves, or above the sky, a secret island, lofty mountaintop, or profound dream state; but it is always a place of strangely fluid and polymorphous beings, unimaginable torments, superhuman deeds, and impossible delight. The hero can go forth of his own volition to accomplish the adventure, as did Theseus when he arrived in his father’s city, Athens, and heard the horrible history of the Minotaur; or he may be carried or sent abroad by some benign or malignant agent as was Odysseus, driven about the Mediterranean by the winds of the angered god, Poseidon. The adventure may begin as a mere blunder … or still again, one may be only casually strolling when some passing phenomenon catches the wandering eye and lures one away from the frequented paths of man. Examples might be multiplied, ad infinitum, from every corner of the world.”

Campbell also wrote about what happens if the call to adventure is not answered:

“Refusal of the summons converts the adventure into its negative. Walled in boredom, hard work, or ‘culture,’ the subject loses the power of significant affirmative action and becomes a victim to be saved. His flowering world becomes a wasteland of dry stones and his life feels meaningless – even though, like King Minos, he may through titanic effort succeed in building an empire or renown. Whatever house he builds, it will be a house of death: a labyrinth of cyclopean walls to hide from him his minotaur. All he can do is create new problems for himself and await the gradual approach of his disintegration.”

Depending on the position of this card, consider whether this may be the time to answer the call to adventure.

Read an excellent article on the Monomyth the universal mythic structure which begins with the call to adventure.

In my most autobiographical essay, The Path of the Numinous, I write about several calls to adventure and how I answered them.