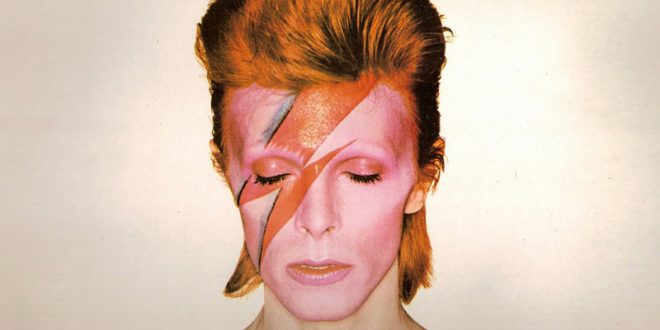 More than any other figure in popular culture, David Bowie embodied and personified androgyny* and the “Singularity Archetype** (see definitions of these terms below).” Androgyny is about far more than a gender ambiguous appearance, It is an emergent, evolutionary theme which I explore in my book and other writings about the “Singularity Archetype.” David Bowie mixed androgyny, with sci-fi motifs and themes in his music and some of his film roles, especially The Man who Fell to Earth.

Sci-fi books, movies, graphic novels, etc. are the richest source of contemporary mythology and emergent archetypes that reveal transformative forces at work in the collective unconscious of the species.  A key motif in sci-fi is the androgynous, parapsychologically potent matrix-shifting mutant.  Another aspect of the androgyne that David Bowie embodied was the shape-shifter.

As Bowie morphed from glam harlequin personas to the White Duke, etc. he personified the theme of a shape-shifting appearance with high ideoplasticitiy—an ability to wear inner psychic content on the outside of the body— an explosively emergent theme in the human collective with many evolutionary implications.

Instead of diluting and diminishing his archetypal role by doing a lot of interviews or otherwise being visible in public not in persona, he chose to be a bit secretive allowing the various fantasy roles he assumed, and the archetypal themes they embodied, to predominate in our imagination.

Casting Precious into the Cracks of Doom, Androgyny, Alchemy, Evolution and the One Ring

My book on the subject:

Crossing the Event Horizon—Human Metamorphosis and the Singularity Archetype

Androgyny, Androgynous, Androgyne   Androgyny refers to the integration of archetypal Masculine and Feminine qualities within a single individual. It is the sacred inner marriage or union of opposites, of yin and yang also known as the hieros gamos. Androgyny is an intrapsychic orientation and not necessarily related to physical appearance, gender preference and other attributes with which it is often confused.  An androgynous person could look distinctly male or female, while an androgynous-looking person may not be androgynous.  Similarly, bisexuality, an interpersonal orientation, is not necessarily a sign of androgyny. The androgyne represents a conscious fusion of archetypal masculine and feminine qualities, while the “hermaphrodite,” as Singer adapts the term, is a person where masculine and feminine are merely confused. Many people who are costumed in an androgynous way are actually hermaphrodites.  In The Gnostic Gospel According to Thomas, Jesus defines androgynous wholeness: .”Jesus said to them: When you make the two one, and when you make the inner as the outer and the outer as the inner and the above as the below, and when you make the male and the female into as single one, so that the male will not be male and the female (not) be female…then shall you enter (the Kingdom).”

**A brief definition and outline of the Singularity Archetype: