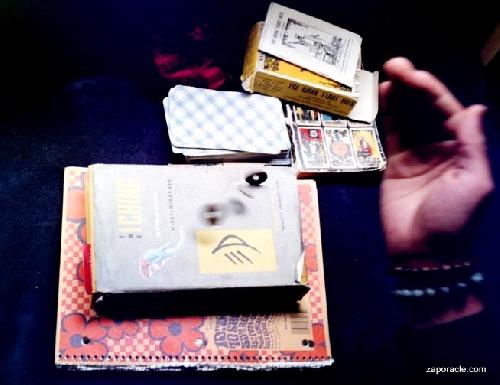 The first time I ever photographed an I Ching coin toss caught a coin landing on its edge.  photo copyright 1996 Jonathan Zap 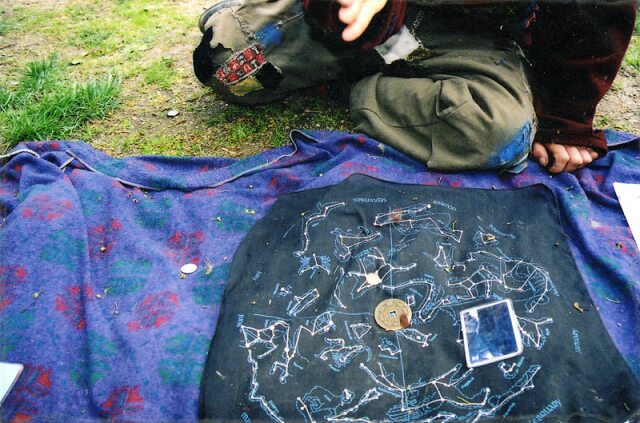 This was the second time I photographed someone tossing the I Ching coins.  It also caught a coin landing on its edge.

Synchronicity is a term that was coined by C.G. Jung in the 1940s after some dinner conversations with Einstein. But it was another Jewish, Nobel prize winning physicist, Wolfgang Pauli, who was Jung’s close collaborator on the theory of synchronicity.

Jung defined synchronicity as an “an acausal connecting principle.” In other words, synchronicity describes relationships that are not mediated by cause and effect, but instead have an acausal parallelism. Jung was searching for a way to account for those uncanny, completely improbable “coincidences” (assumption of randomness) where something from the inner life and something from the outer world would “synch up.” For example, Jung reccounts an incident that occurred when he was treating a woman patient.  This woman, according to Jung, was blocked from progressing in her psychoanalytical treatment because she tried to apply a superficial rationalism to everything. One day, this woman came to her session very excited. She had just had a “big” dream that involved Jung. In the denouement of her dream Jung appeared and handed her a golden scarab, an object that she recognized as an Egyptian symbol of immortality. As she was relating the dream, Jung noticed a tapping sound coming from the window of his consulting room. He opened the window and a golden, scaraboid beetle, not native to the area of Switzerland where his consulting room was, flew into the room. Jung caught the insect in his hand and when the woman related the moment in the dream where Jung gave her a golden scarab he opened his hand and presented her with a living, golden, saraboid beetle.  This intense synchronicity punctured her superficial rationalism and she was able to progress with here analysis. Jung could find no causal agency that would explain why this insect would go against its natural instincts and demand admittance to a darkened room.

A personal example of a synchronicity involves a day some years ago when I was reading Jung’s book, Synchronicity, the Acausal Connecting Principle. At the time I was living in the East Village area of Manhattan and was reading the book in the libary. In the passage I was reading, Jung recounted a series of synchronicistic events that began with dreaming about a fish.  He awoke from the dream and the first book he opened had a picture of a fish.  Then there was fish for lunch, and later he saw a dead fish on the sidewalk, etc.  I remember being greatly underwhelmed by this anectdote. A fish is such a common thing, I thought, if you were looking for it of course it would seem to be everywhere. I gathered up my stuff and exited the library walking the two blocks to my apartnemt building. I unlocked the outer door of my building and walked up the four flights of stairs to my apartment.  Someone had drawn a picture of a fish in white chalk on the door!

When Jung coined the term synchronicity it was a speculation. Since then, the findings of quantum mechanics (especially what is referred to as “nonlocality“) demonstrate that synchronicity is a key organizing principle of the universe. If synchronicity governs the oracle consultation, then when you toss coins or choose pebbles to create a hexagram you create a pattern that refelcts that moment in time, and that moment in time includes your intentionality in approaching the I Ching and the energetic dynamics of your situation. Anybody who works with the I Ching discovers how synchronistic it. Three summers ago I had a run of nine consecutive days getting the same hexagram (number 23, Collapse) each day for my daily general life reading. According to probability theory the odds of this happening randomly are 1 in 64X64X64X64X64X64X64X64X64.