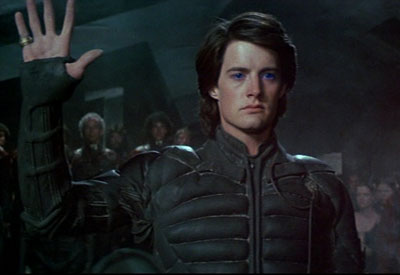 Paul Atreides, also known as Muad’dib, is a messianic figure from the Dune books who manages to throw off the balance of power in a galactic imperium. Paul’s prescient visions begin to emerge when he’s fourteen years old. As an adolescent, Paul survives a rite that involves imbibing the “Water of Life,” a frequently lethal hallucinogen variant of what’s called “the Spice” or “mélange.”

Paul emerges from the nearly fatal rite as the “Kwisatz Haderach,” which in the Fremen language means “the one who can be many places at once.” According to Wikipedia, the phrase, “…bears close resembles to the Hebrew phrase ‘Kefitzat Haderach’ (literally ‘Contraction of the Way’) a Kabbalic term related to teleportation.” Paul’s prescient vision has become godlike, and, like all others who have survived the Water of Life, he is now aware of the psyches of all others, living or dead, who have similarly survived this rite. Paul is a personification of what I have termed “the Singularity Archetype” and the networked telepathic awareness of other psyches is a frequent aspect of this archetype which I call “Homo gestalt.”

Paul deserves some special sympathy as a fiction demi-god because he was unfairly despised by his own creator—Frank Herbert. I discussed this with Kevin J. Anderson, co-author of the new Dune novels, who also expressed dissatisfaction with some of the things that Frank Herbert had Paul saying or doing that seemed painfully out of character. Herbert privately compared the Atreides family to the Kennedys, and he despised the Kennedys and charismatic leaders in general. The creative muse, however, is more sympathetic to Paul than Herbert’s conscious ego, and to many Paul is an admirable figure—a shaman Warrior who, with great courage and sacrifice, metamorphoses into a potent mutant who overthrows a vast patriarchy.