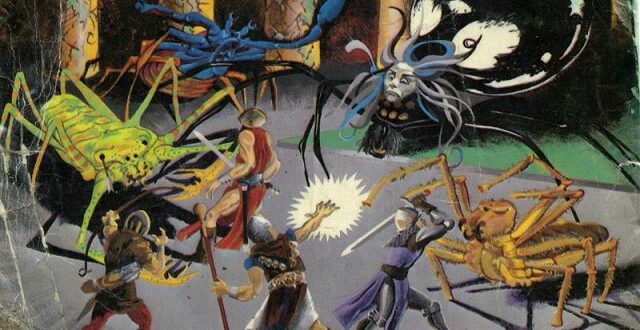 Someone gave me this card which apparently came from some sort of role-playing game. Unfortunately I don't have any information on the artist. CARD URL: https://www.zaporacle.com/card/battling-devouring-mother-forces/

The Devouring Mother is an archetype that refers to the devouring aspect of nature/the feminine. An addict is an example of someone caught in the jaws of this all too real archetypal force. Parasites, which outnumber all other species four or five to one are embodiments of this energy. People (individually or in collectives such as governments) can be parasites or predators and embody this force as well. The battle could be within, without, or both.

The Gorgon of Greek Mythology and is an example of the archetype of the devouring mother. But this archetype is not merely found in ancient mythologies; you can find many iterations of it walking down a city street. It could be a coworker that wants to see you fail, an addiction that would like to consume your money and health, or a sexual vampire.

Consider this a propitious time to summon your will to defend yourself from the many forms of the devouring mother.

See the mind parasite category of the writing section and also Parallel Journeys for an example of the devouring mother.